Diplomacy during a time of war is always tricky. Just trying to get an emissary in alive to be able to negotiate any treaties can be a very hazardous undertaking. A friendly nation had a heck of a time getting their dignitaries in to meet with your king. They lost their accompanying support in the process. Never the less, they were able to make it in safely. A bond has been formed and they have agreed to send aid. Now, they just have to get back home to be able to relay the news to their people.

Safely escort your assigned dignitaries off the opposite table edge.

Each player is assigned 5 Dignitaries. Dignitaries can be fielded as any of three types, as a Solitaire, Banded group, as an Elite (if the player has any open elite spots), or a combination of those.
Use the following stats for each Dignitary: 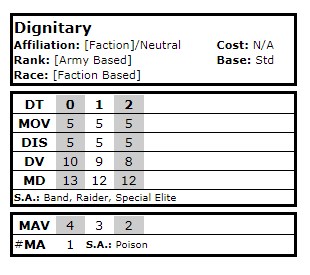 At the end of the game, each player gains 1 Scenario Point for each Dignitary that is able to reach the opposite table edge from where they deployed. Likewise, players gain 1 Scenario Points for each Dignitary from the opposing player that they are able to destroy before they can reach their destination. No points are awarded to either side for Dignitaries still alive on the table at the end.
At the end of the game, each player divides the total number of points worth of enemy models killed by 200, rounding to the nearest whole number, to find out the number of Scenario Points earned for kills (max 5). If all enemy models were killed, but their army did not add up to a complete 1000 points, you still receive the full 5.